The Restoration of Glenlee begins

Now that Glenlee had returned home to the River Clyde, there was much work to be done. The ship had survived a long and eventful life at sea, but periods of neglect and decay had left the vessel unrecognisable. A significant restoration would be needed before Glenlee could begin its new life as a museum ship and visitor attraction.

The restoration aimed to, as far as possible, return the ship to how it would have been in 1896 when it was first launched as the cargo vessel Glenlee. This was very fitting since the vessel had been a cargo ship for many years and had recently returned to the Clyde and its original name of Glenlee restored. However, the Spanish Navy era was a significant part of the ship’s history, and some features of that time would remain. The engines were cleaned of rust and dirt and were re-painted in the colours used by the Spanish Navy. To this day, these same engines are on display in the engine room onboard the Glenlee. There is also the Galatea Learning Suite onboard, used as a classroom today by our Learning and Access team.

The initial restoration was substantial, involving a lot of difficult and time-consuming work. Ballast and cement were removed to expose the main frames. The hull was re-painted. Grating, skylights and a wheel steering box were made. The bowsprit was put back in place, and a new figurehead named ‘Mary-Doll’ was carved. Two new deckhouses were also installed. 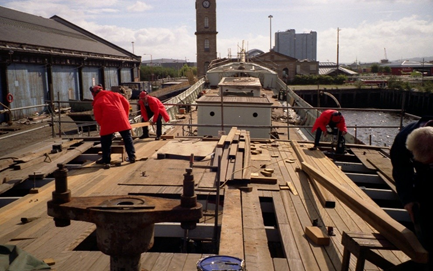 The deck being restored at Yorkhill Quay

One of the biggest jobs of the restoration was replacing the weather deck. All the decks on the ship ultimately had to be replaced. The poop deck had been burned, and both the weather and the fo’s’cle deck had been badly damaged due to severe neglect and exposure to extreme heat in Seville. The weather deck was re-laid in 1998, using a hardwood called Opepe. To this day it is maintained by our crew in the traditional way, by caulking the deck. This involves stuffing the space between the decks with oakum and then sealing the area with pitch, a substance similar to tar. Oakum is a material that comes from a hemp-based plant. In the past, prisoners would tease hemp ropes apart to create oakum, and many believe this is the origin of the saying ‘money for old rope’. 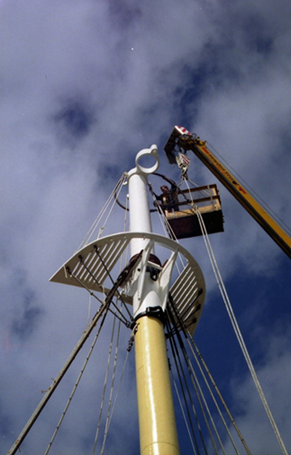 Another huge job during the initial restoration of the ship was re-stepping the masts and re-installing the rigging. This was done in a workshop on the quayside next to the ship, at the same time as other repair work was done on the vessel. Glenlee is a three-masted barque, and there is the main, the fore and the mizzen mast. Re-stepping would have been an enormous task, as the masts are made of steel, and when assembled the main mast is as tall as ten double decker buses piled on top of one another. On 16th July 1998, the three masts of the ship were put in place, and the rigging was re-installed with the help of specialist riggers from San Francisco. 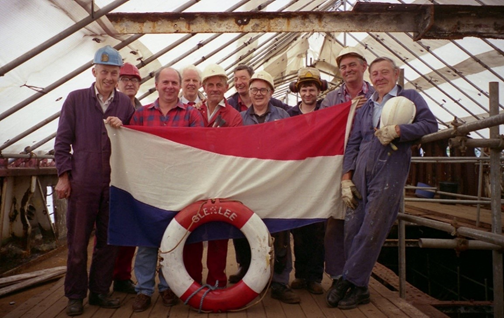 This initial restoration was carried out by a dedicated and talented team of volunteers and crew, some of whom still work or volunteer with us today. One of the men who worked on the initial restoration of the ship, Andrew Aire, has been the Ship Manager for many years.

Look out for our article next week, where we will continue to explore the restoration and reach the opening of The Tall Ship Glenlee to the public.